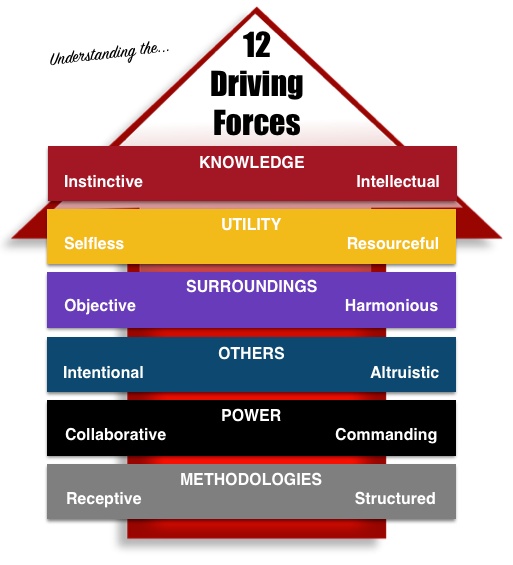 The Driving Forces to Success

In “Are You For Real,” I explain how I quickly learned that I wanted more than a JOB, which is the acronym for “Just Over Broke.” Yet so many people I know and coach seemed to be mired in a job, much of it due to their own making and their own mindset.

I will tell you that NO one can motivate you to change...that has to come from WITHIN. Coaches, mentors and bosses can only help you help yourself by understanding what motivates you. The recent conference I attended at TTI Success Insights was particularly life-changing for me as a coach because for the first time, I felt I had those tools to help you through the process of discovering not only what motivates you, but the why.

We were introduced to the concept of Driving Forces, which are 12 factors that influence people’s motivation to improve, grow and succeed. The assessment used helps map out where in these Driving Forces that you fall. The idea is to focus on the four highest scoring areas, which impact people the most, and the other eight being incidental and not as important. It’s a lot to walk through in the space of a blog, but I’d like to share this just to pique your interest and excitement in understanding how you can succeed.

For employers, this is equally exciting. Why? Because it creates a more engaged workforce. And according to the Gallup report on the State of the American Workforce Report, companies that have high employee engagement experiences:

So let’s dive in...if there are terms you’re not familiar with, I talk about the expanding glossary that comes with assessments in a previous blog.

What are “driving forces?”

Basically, they are what spark your motivation...some people like to refer to it as your “why.” In other words, you might know you are motivated to exercise every day - that’s the “what” of it. But your driving force can be physical health, mental health, or a need to lose weight. That’s the “why.” Without a why, motivation doesn’t exist. TTI breaks it down into six categories, with two ends of the spectrum that can describe people’s interests.

On one end, some people are driven by experience from their past to gain knowledge, and use that to apply through intuition (we often call it ‘gut feelings’). This is almost a “backward-looking to move forward” method. This isn’t to say they aren’t interested in learning new things, but they are better learn-by-doing workers, often with a mentor to facilitate their growth.

Intellectual knowledge seekers tend to look forward for their knowledge, call it more head learning. What drives them is the opportunity to learn new things, and dive into the discovery of truth, which makes them great problem-solvers.

The people driven by Utility are motivated by the reward of completing tasks, but it’s in just who is rewarded that separates one end of the spectrum from the other. Selfless motivations don’t necessarily mean that they’re better than Resourceful ones, they just have a different focus. So, if you’re someone who is motivated to complete a task because it will bring a positive result for a greater good, or will help someone else, and you’re not as interested in your own personal reward, you fall into the Selfless category. These types make great team players.

Resourceful people are also driven by getting results through completing tasks, but their reward is in seeing returns on their investments of time, talent and energy. If you’re someone who is driven by the prospect of achieving a new personal best in sales or other fields, you would be considered more resourcefully influenced.

Objective people, as the name suggests, are driven by logic and facts, and are great for team situations because they aren’t interested in drama. Their work environment won’t impact their ability to be motivated, which allows them to work under difficult circumstances.

One the other hand, Harmonious people are about the experience including their surroundings and are driven to improve it. They’re creative and artistic thinkers and look to strike a harmony and balance with the people around them. If you give them the license to exercise their creativity, you can get a lot back in return.

Intentional people don’t mind helping others, as long as they can see a reason or purpose behind it, especially as it relates to their own goals. They tend to keep emotions out of their decision making, but they aren’t necessarily disagreeable. They will be the employees who can find others who can collaborate with them to achieve the best results.

Altruistic people focus on others, and making the world a better place by eliminating conflict. If you don’t see how that can improve your business, consider how valuable someone like this is when you have a difficult but important client.

Both ends of this spectrum of Power have great assets — and both can bring great value to any business.

Collaborators play great support roles...teams thrive with such people, as their commitment to a goal is no less intense. They simply are good with running things in the background for the support of everyone’s success. It may not seem like a role that would fall under the Driving Force of Power, but think about it: it’s often these people that are the glue that makes everything else hold together and that’s a strong player on any team.

Commanders of course like status, being in charge, and the recognition that comes along with it. Applied well, they can lift others to perform better, especially if the task at hand needs strong and clear leadership.

Receptive people are brain-stormers, people who ask how ELSE can a problem be solved, and invite new ideas from their teams. They are driven by finding alternative solutions to familiar problems. In some circles, it’s called “design thinking,” where it’s not about the quality of the idea at first, but the quantity. The more able people are to spout out ideas, the more creative a solution can be found, and it’s this process that excites Receptive people.

Structured people lean on proven methods, because ultimately they want to do things “right.” This isn’t to say they won’t research other ideas, but those ideas must already have a history of success.

Do you recognize yourself in any of these descriptions? These are worth exploring, and taking the full assessment can give you so much more information and tools to work with to use to your advantage. One is not better than another, but they can give you insights into how to not just collect a paycheck, but to feed your passion.