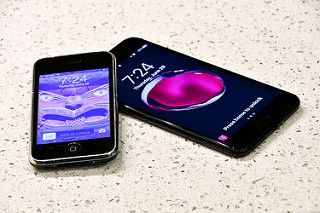 When phones were dumb and people were smarter

I remember the days when cell phones started to sell; as a matter of fact I was part of the team at Motorola that was responsible for introducing cell phones to companies or individuals back in 1986. Whoever thought at that time how cell phones would become smartphones and would be what they are today? I didn’t really see it coming. I witnessed cell phones get smaller but never really knew that this is what’s going to come of it, or I would have warned you sooner: Smartphones make you dumber.

By “this” I mean our utter dependence on information from our phones, so we don’t have to think or ask someone personally for the information. In many ways, they’re like what ATM cards are to tellers. I talk about my experience in banking in my book “Are You For Real?!” When I started my first job in a bank, people came in with a bank book to deposit or withdraw their money or add interest to the account. I remember wondering, “What would happen one day - are we going to have a computer or ATM so people can do it automatically?”

I thought about it, but, didn’t pursue the idea, I guess I missed the boat on that one, but then again I’ve been more interested in people than technology.

Smartphones: all the answers, but all the power

Smartphones or cell phones have really gotten smaller, but they have also gotten smarter. They replace computers, and don’t get me wrong - there a lot of good things that you can use a smartphone for. There are tremendous amounts of software that are available to use, and in many cases can help you conduct and manage your business.

But of course, there’s also social media, whether it’s Twitter, Facebook, LinkedIn, Instagram. People are constantly using these tools, for one reason or another, and it’s distracting them from looking UP at one another.

So, what I want to talk about is how salespeople use their smartphones to their benefit or not? Is your smartphone making you dumber?

Let’s face it Google, Bing! and other similar search engines create information at the touch of a button. Or with your voice. Question asked, and answered with no effort. Yet that means our own brains don’t have to exercise very much. Think about it. At one point, you probably could remember hundreds of phone numbers. You had to, and your brain responded. Now, you ask Siri to “call John” and it’s done. But do you know John’s number off the top of your head? Probably not.

In addition, you likely have dozens of these apps created to take over your mind and your attention. They end up controlling you all the time, and you can see it just walking down the street. You can see it when you’re in a meeting, or in a car and seeing other drivers... everybody’s on their phone. Are they wasting time or not - or more importantly are YOU wasting your time?

I’m not just merely making observations. Science is realizing that smartphones make you dumber, too. A study at the University of Texas called it a “Brain Drain.” Their study revealed that someone’s cognitive ability to hold information and understand it was much better when their smartphone was in another room! As a salesperson, a smartphone therefore won’t just make you dumber, it’s going to make you broke. Attention to your client requires all of your senses, and if they sense you don’t really care, you’re not closing.

Taking matters (and your smartphone) into your own hands

So, ask yourself a question: Are you being held hostage by your smartphone? There’s no doubt in my mind there are apps or tools that will help the salesperson make their life easier on a daily basis, but, how you use them and when you use them is extremely important. I believe that if you are using a smartphone and using it smartly you can really benefit if you’re in the business of selling. If you don’t the alternative is that your smartphone is making you dumber.

Let’s face it - it’s very easy to get distracted. Sometimes we go through tough times where people are not buying, we’re not prospecting, we’re tired - whatever it might be. That’s the down side of the sales rollercoaster. But instead of doing the right thing and take the steps that were supposed to in order to achieve our goals, we are lured away and spend time on the smartphone, playing games, looking at Twitter, looking at Facebook, etc.

Ask yourself before you pick up the smartphone: What is it that I need to know that I could do later at lunch time? Could my distract help me fail in what I’m supposed to be doing?

Adopt these habits so both you and your smartphone can stay smart:

• Monitor your use: one study found that the average person picks up his smartphone 85 times a day. 85. Track your own usage and see how much time is being spent on your smartphone, and what you’re using it for. The result may scare you into smartphone “dieting.”

• Schedule use - When you’re working, you are working; the phone needs to be completely off, or at the very least in airplane mode. Then pick 2-3 times a day where you can catch up on whatever you may have missed (no more than 15 minutes each).

• Clients come first, smartphone last. Adopt the habit of putting your phone out of sight when you are talking to a client (even on Skype). Not in your hand, but in your pocket or briefcase. If your client wants to make a future appointment and you want to put that on your calendar in your phone, fine. Otherwise its absence tells your client they are the most important thing in the room.

No doubt, business and sales is a discipline. It isn’t easy. What has become easy is reaching for the smartphone...but don’t let it make you dumber in the process.