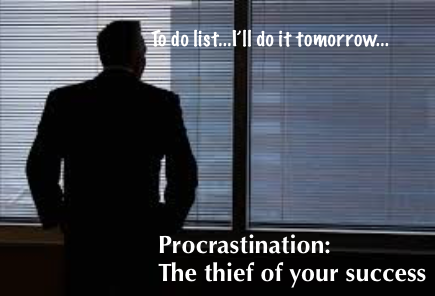 By far, the most common thing I see with clients who struggle, whether it’s goal setting, time management, or personal development, is procrastination. It’s at the root of all of it.

Procrastinators are common, and I’m sure you can point to something in your life that you either

• Fear will end in failure

• Fear will be successful

Truly, procrastination doesn’t have to make sense, and we’ll take a closer look at why success would be something people run from in a moment. For now, let’s talk about how we can move past our inaction and fear to make progress.

Psychology Today points out that 1 in 5 of us are chronic procrastinators (all the time, in any situation), with others getting stuck in certain situations.

• Decisional - people who don’t make a decision, perhaps because the fear of failure or blame; these are people who feel that putting off a decision will keep them blameless if a situation goes wrong

• Avoiders - driven by fear, some people will even shrink from the idea of success in their endeavors

Oftentimes, if you know of any perfectionists, by their nature EVERYthing needs to be just right before they can act. However, in an imperfect world, we know that those circumstances rarely exist. And there they sit, refusing to embrace the idea of “progress, not perfection.”

Procrastinators can have their goals, see them and agree that they are important to their success, but the feeling of “I don’t want to” or “I don’t feel like it” is more powerful. They will find or create whatever distractions (I call them what they are: EXCUSES) they can to prevent them from actually performing the task.

Like any problem, the first step in fixing the problem is to recognize it. Identify what the very FIRST thing is that you need to do in order to move from inaction to action. Simply, if it’s a call you have been dreading to make, it’s picking up the phone. Need to meet with someone? Open your calendar to pick out a few dates to schedule it.

This is where time management becomes key. It takes the emotion out of your decision, and let’s face it there’s a lot more going on in your head that keeps you from acting, and places it on your calendar. You can also make a simple list, if you’re not keen on calendaring, however people tend to cheat on lists, skipping to the tasks they want to do, and oops — look! — the day is nearly over, and there’s no time left to tackle that less desirable task.

Make the time. Schedule it. And place something more desirable after it. Consider it a reward for doing the hard work. It’s like ice cream after a bitter pill. Scheduling this block of time also elimates excuses and distractions. If you work in an office, you may also want to post a schedule on your door, or place a sign up when you are in a time block that tells others that you are not to be disturbed unless it’s critical, and rarely are interruptions truly critical.

Based on your motivators and work habits, identify where and when you work best. Those things that you are procrastinating over should be taken care of in that context, where you know you are the most productive.

Be ready for an internal fight. You’ve developed some fear over doing certain tasks, so it’s important to ask yourself what those fears are, even write them down. Then ask yourself WHY you have fear over those things. The process can help you rationalize more clearly, and take the power away from those fears. The key here to is to also take the emotion away from it, rendering it small and much easier to overcome.

Enlist a partner to keep you accountable. If telling someone you didn’t complete a task that you promised you would is a negative driver that will help you succeed, use it. A coach or partner can help you stay on course and provide feedback and tools that can move you forward.

So, while we’re on the subject of fear, let’s talk about why anyone would fear success.

There aren’t easy answers, but in some cases people equate success with an experience that was risky, or because we’ve been told (lied to) that we didn’t deserve it. The joy in achieving something is overshadowed by the terror of it falling apart. Or experiencing negative reactions from others who are envious of that success.

More deeply, others view the excitement and arousal of success similar to the emotion of trauma, which is obviously unpleasant, according to psychologists who work with people experiencing forms of post traumatic stress syndrome (PTSD).

So while I read that procrastination can point to a lack of discipline and self-control, I also know that it’s often far more personal than that. My simple opening question of “Are you for real?” isn’t so simple, and it does make people feel uncomfortable.

However, that is also the good news, as getting to the root of a problem can be a little more scary or painful, it also leads us to personal development that helps us overcome these issues. Procrastination is chief among them, and you don’t have to stay “stuck.”