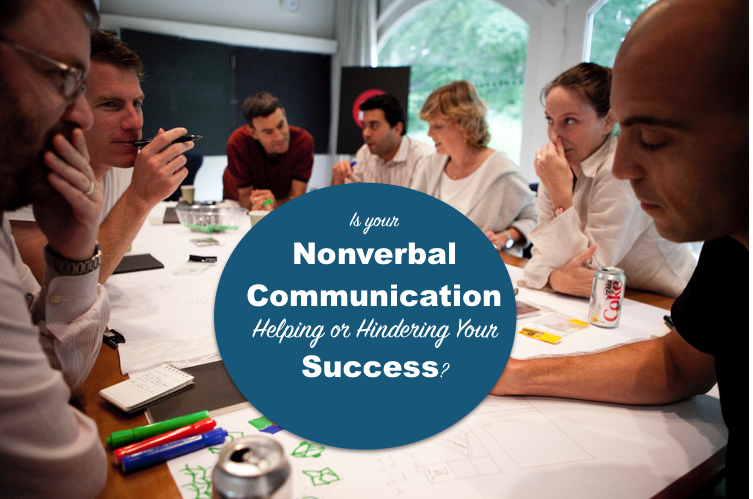 Non-Verbal Communication: Do Your Words Match Your Actions?

I have a few rules when I meet with a client or a prospect, and chief among them is that they make the same investment in paying attention to me as I am with paying attention to them. Some people are OK with simply asking to silence their cell phones. Me, I don’t even want the distraction of hearing it vibrate. So I ask people to literally turn. it. off.

As part of how I coach, I believe in honesty between myself and the person I’m coaching, but even more importantly with my client and themselves. Part of getting to that raw honesty is seeing yourself as others might see you. The buzz word these days is self awareness. To practice, I encourage people to role play as if they were talking to a customer or a coworker or their boss, but I ask them to do this in front of a mirror.

It’s amazing what your reflection can reveal, and much of it is in the NON verbal communication you convey when you are speaking. So, if you want to be successful in dealing with people and winning them over, pay attention to these do’s and don’ts.

It might be the most intimate thing you do when you meet a stranger...you offer your hand to them in greeting. In that short exchange, you learn a lot about each other, which makes this a vital piece of communication to get right. I’ve shaken people’s hands who nearly broke my hand, and others who were like a boneless piece of meat. Neither one leaves a good impression - one is overpowering, the other is completely disinterested.

Try and match the grip of whoever you’re shaking hands with and be firm and shake from the elbow, not the wrist. It sounds funny, but you can tell a sincere handshake apart from one that’s just a formality. A good handshake is an extension of your genuine interest in meeting this person and should communicate that you’re truly happy and eager to meet them without being overly aggressive.

Here’s where that mirror in practice comes in handy. What does your face look like when you say “hello”? Or when the person is explaining something, telling a story, or asking a tough question?

The same goes for when it’s you talking. Does your face wince when you talk about certain people? Do you look angrier than you should when you’re talking about an issue that you’re against?

Overall, you want to be natural, or as I like to say - REAL. If you’re completely stone-faced, that may come across as uninterested, not understanding or perhaps even angry. On the opposite end of the spectrum, don’t go overboard to sell the other person on your interest with wide eyes unless you truly are amazed by something they say. People know the difference between genuine interest and engagement and being patronizing.

What do people look like when they’re interested in what you’re saying? I mean really, truly and authentically? They might lean forward, face you directly and even cock their head so they don’t miss a word you’re saying. That’s a perfect way to express to the other person that you value them, and they in turn will respect you for that and build trust with you.

On the other hand, if you’re leaning away, slouching, crossing your arms or maintaining a stiff posture, it’s going to tell that person you don’t care. You might not be interrupting what they’re saying, but you’re not listening, rather you’re just waiting for your turn to talk. You may come off as aloof, tense or at the worst, insulting.

The eyes have it

This is where cell phones have ruined people. No one truly looks at each other anymore. Go to a casual restaurant sometime and look around. I guarantee you there are many tables with 2 or more people sitting together, saying nothing, and looking down into the smart phone in their hands. I wonder why they went to dinner together if they’re just going to ignore each other during the entire meal.

It’s rude in these cases, but when it’s someone you’re trying to do business with, it’s downright lethal to your success. So, put away these distractions, and look at the person you are talking to. There’s almost never a downside to eye contact, unless you’re positively leering at the person, which will make them uncomfortable. With your eyes on them, you can also catch the nonverbal cues in what they’re saying. Perhaps you’ll catch a look of pain whenever they discuss a problem in their company and that’s a perfect opportunity for you to note what bothers them, and perhaps how you can help.

It takes a lot of inward-focused exercises to make your outward-directed behavior become authentic and engaging, the role playing in the mirror is part of that. But as society generally becomes worse at effective nonverbal communication, the work you put into it will set you apart and make you a more valuable person that people will be drawn to. And when you’re someone who is appealing to get to know, it’s not hard to see how that can lead to greater success in your career as well as your life.