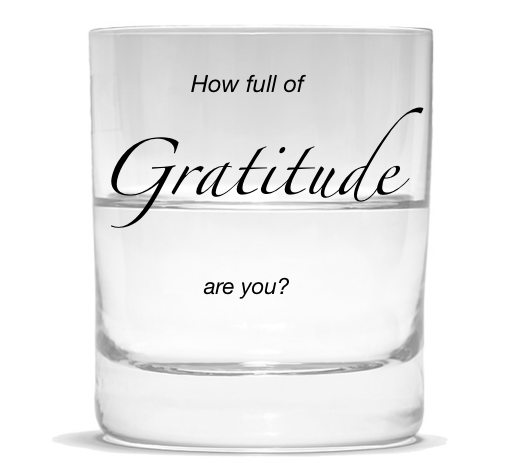 When you were a small child, do you remember your parents prompting you when you received something, “Now, what do you say?”

They were teaching you more than manners or being polite in saying “Thank you,” they were literally handing you the keys to success.

We often breeze through Thanksgiving on the way to the big box store, so it’s no wonder why we tend to overlook this powerful practice. And, make no mistake, gratitude is a practice. It requires conscious thought to find something to be grateful for, everyday and every moment. And it’s so good for us!

Some interesting findings about being grateful on a regular basis:

• Happiness is not really dependent on our circumstances, but influenced by intentional activity like practicing gratitude

• Less surprising, gratitude makes you more optimistic, which in turn improves your health, even to the point where studies show increased lifespan

• Mentally, gratitude makes you stronger and more resilient; setbacks are not your undoing if you’re a grateful person

• People like grateful people, which is extremely valuable when your career depends upon creating and building relationships

• Managers are more effective when they express gratitude toward their staff

• Productivity also increases, as gratitude helps you focus on your work and not your worries

As a business coach, I hear a lot of complaining. It’s what often prompts people to seek my counsel in the first place. However, taking a negative attitude with you spells trouble for any hopes for success.

Jane is a manager with hopes of moving into a C-suite position in the next 5 years. She’s decided to write down a plan featuring steps that will lead to her goal. She takes a few minutes every day to review her tasks, and what she will need to do to be successful. She has been passed over for a promotion recently, but after having a discussion with her supervisor to determine what she’ll need to work on, she’s taken that setback as an opportunity to learn more skills.

Karen is in the same position as Jane, and wants the corner office someday. She feels somewhat resentful that she also was passed over for the promotion, and has been angry about it. She has been at the company the longest of al the candidates, and feels entitled to the promotion. She hasn’t spoken to her supervisor about it, because she feels he’s got something against her anyway.

Night and day, although a bit exaggerated in this example, isn’t it?

So my challenge to you is to really look inward and think of things that aren’t happening in your life that you would like to. Chances are, much of it can be due to what you are projecting — negativity, resentment, indifference — and what you aren’t doing, like intentionally acting to set goals, and convey an “attitude of gratiude.”

It goes beyond simple thanks, really. Gratitude is an intentional act to find the positive in any situation, and to make it more important than what isn’t ideal about it. Gratitude is not about being unrealistic, rather it will make you more capable to handle what reality hands you every day. There’s a saying that goes, “You can be in a situation, but you don’t have to be of the situation.”

So, start simple: get a basic notebook, and write down in it something that is positive in your life, and feel the gratitude for that thing. You may have difficulty at first, but it’s amazing that over time, this becomes easier as you form the habit of thinking grateful. Then also take that attitude and focus with you to work, and see what changes.

Most importantly, don’t wait...do this now. You’ll thank me later.